Most solar cells are currently made of silicon. But recent research has proved that perovskite might soon replace silicon. This would both decrease the cost for consumers, and increase the efficiency of the panels. Here’s some of the reasons why.

Some science behind solar panels

Solar panels consist of many individual solar cells, which sandwich glass, a semiconductive material, and wires together. The semiconductor converts the photons in sunlight into electrons, which run through the wires to provide energy to your home.

The semiconductor within solar cells has historically been composed of silicon. Silicon-based semiconductors are, unfortunately, difficult and expensive to manufacture, and are a driving force behind high solar panel costs. They also have a maximum possible efficiency of only 33%, because they can only absorb relatively low wavelengths.

Recently, scientists have begun researching a group of materials called perovskites. Perovskites would be much less expensive to manufacture and could increase the solar panels’ maximum possible efficiency. The atoms within perovskite bond to one another in a unique pattern (aka a “crystal structure”) much different from that of silicon. The properties of materials are determined by their structures, so perovskites display many material properties different from silicon. (More on crystal structures at the very bottom of this article.)

Benefits of perovskite over silicon

The properties improved by using perovskite over silicon include easier manufacturing, the ability to generate more energy, increased transparency and flexibility, and decreased weight. Each of these benefits leads to less expensive and more useful applications for solar panels.

Additionally, Dr. Daniel Gamelin (a chemistry professor from the University of Washington) has developed “perovskite quantum dots,” which go on the surface of solar cells. These dots emit two low-energy photons per high-energy photon absorbed. Solar cells can typically produce one electron per photon, so doubling the number of photons doubles the potential efficiency. Where silicon solar cells have a maximum theoretical efficiency of 33%, perovskite cells could attain closer to 66%. Efficiencies above 45% are unheard of, so this would be revolutionary. 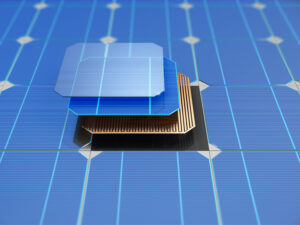 The increased efficiency and decreased manufacturing costs of perovskite solar cells decrease the price of solar panels by an estimated $0.65/kWh (assuming a cost of $4.22/kWh per silicon solar panel). In an average home solar installation costing $14,000, this would save a homeowner $2,800–and as perovskite cells continue to improve, these savings will continue to increase.

Additionally, the market value of perovskite solar cells is estimated to increase by $1.5 billion from 2017 to 2022. This increased market value will undoubtedly come with more advances in the industry, and more decreases in cost to homeowners.

Unfortunately, in addition to introducing several benefits, perovskite also presents several issues. These issues mean that perovskite panels aren’t quite on the market yet. Scientists are working on overcoming these problems, which include toxicity due to lead, deterioration in water exposure, and defects in the crystal structure. 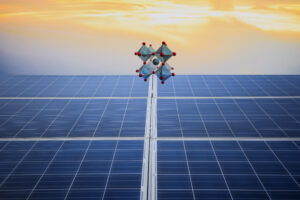 Changing how the perovskite is manufactured–adding one heating (annealing) step into the printing process, for example–can increase the crystal size and decrease the number of defects. Adding this one step into the process keeps manufacturing costs below those of silicon. This process is also not yet mainstream.

As these issues are being overcome, there is reason to believe that soon, the benefits of perovskite will soon outweigh the drawbacks. Perovskite cells might therefore soon become more popular than silicon.

The cost of a solar panel installation for your home would continue to decrease as perovskite seeps into the market.

Every molecule has a very specific structure its atoms typically fall into; for example, NaCl forms a simple cube of alternating Na+ cations and Cl- anions. 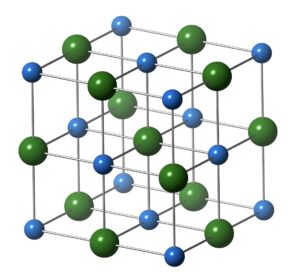 The silicon structure is slightly more complex, as shown below.

Perovskites are a group of materials that form a simpler crystal structure than silicon, known as the CaTiO3 (or ABX3) structure. The A, B, and X can each be replaced with any number of elements, as long as the charges balance out. In CaTiO3, for example, the Ca has a 2+ charge, the Ti has a 4+ charge, and the O has a 2- charge. The formula that gives us is 2+4-2*3=0, which shows us that the charges balance out. So almost any combination of two positive ions and one negative ions that cancel out their charges would fall into this crystal structure.

The different structure of perovskite gives it many advantages over silicon, as discussed above.