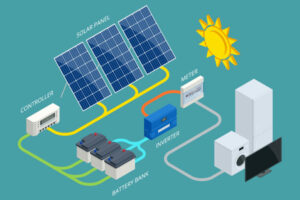 We all know that light has magical healing properties; Superman heals through exposure to the sun, and snakes recharge on sunny rocks. Even in the most fantastical stories, light has healing energy. What isn’t clear in the stories is how such a phenomenon occurs. Fortunately for us, the science behind solar panels processing energy from light is clearer than how Superman’s cells use light to heal.

We understand that solar panels are a clean, renewable energy source. We know they work better on sunny days and worse on cloudy ones. But how exactly do solar panels take light and transform it into energy? If you put aside Brownian motion and rocket science, it’s really a simple three-step process based on a phenomenon first defined by the father of relativity and statically charged hairdos, our hero, Dr. Einstein.

Solar panels use photovoltaic (PV) cells to transfer energy from photons to electrons. Scientifically, light is a stream of energy-infused particles called photons. As these particles hit certain objects, the electrons within absorb the photon’s energy. Imagine accidentally filling a puppy’s water bowl with Red Bull—electrons react in much the same way as the dog might, becoming intensely excited. The electrons, full of energy, flee the object struck by the light. Einstein called this process the “photoelectric effect”.

Solar panels take advantage of this phenomenon by using PV cells. Silicon is usually used to make PV cells, as silicon experiences the photovoltaic effect at a higher level than most materials. As light strikes the cell, it knocks electrons free from the silicon atoms. Electrons move from highest to lowest concentration, searching for empty space like starving students looking for the shortest lunch line. The electrons leaving the silicon atoms push one another along semiconductors and direct the electrons along wires in the circuit until they reach an inverter.

The electrons must pass through inverters to become usable electricity. Photons striking PV cells create a constant flow of electrons; consequently, the current produced by solar panels is direct current (DC). However, our homes run primarily on alternating current (AC)—meaning the electron flow is reversed dozens of times per second. So, to convert from one to the other—to make the electrons flow forwards and backwards and back forwards again and then back backwards, 60 times per second—inverters are necessary.

Oscillator circuits run inverters which change the excitement and concentration levels of electrons. As the direction of electron flow changes, so does the direction of the current: imagine a Black Friday rush where cashiers run from one end of the store to the other, their lines of customers wreaking havoc as they trail behind. Inverters typically produce a square wave—meaning that the concentration changes abruptly from one side to the other (like if the cashiers teleported instead of running)—which is okay for powering most things, but doesn’t give a very consistent output. For example, the static buzz on some televisions is caused by the square current, which sends quick bursts of electricity rather than the ideal, smooth sine waves. More expensive inverters, however, are better equipped to round out the waves. Once in the form of AC, electrons pass through the net meter and can be used as electricity in the home.

(Thus ends the influence of Einstein. Moving into the present and beyond the three-step process: what happens after the energy is produced?)

Excess electricity can be returned to the power distribution grid. We may rarely give any thought to the electricity pylons that line every road, but the power lines strung between them power every utility within our homes. Power plants usually consist of a spinning electrical generator which often requires natural resources–steam, water, gas, or diesel—in order to operate Most homes draw all of their power from these plants, which is why the United States’ primary cause of greenhouse gasses is electricity production.

Solar panels work in conjunction with the power grid. If solar panels don’t generate enough power for your needs, additional electricity can be drawn from the grid. If they produce more than is needed, the excess returns to the power distribution grid and, in turn, to your utility company. The net meter keeps track of how much power is given to and borrowed from the grid in order to keep your utility company’s billing accurate. After about a year, your solar panels will have given back enough energy to the company, resulting in a noticeably lower energy bill. Plus, Mother Nature will appreciate your efforts to help the environment.

Excess electricity can also be stored within your home. Inverters typically have ready-prepared cells to store excited electrons, if too many come through at once. Additionally, solar energy can be used to charge backup batteries which can, in turn, provide a buffer for those moments when the sun doesn’t shine. Such batteries also provide insurance against blackouts; your home will be able to draw upon this saved energy when storms come.

So, next time the seasons change from winter to spring and you recall the joy of flowers blossoming, remember that the sun can do more than just turn nature green again; it could: