11 Unique Green Roof Projects from Around the World

Green roofs are naturally beautiful. It is as hard to make one ugly as it is hard to remember to bring a mask with you when you leave the house. But there are still some around the world which distinguish themselves above the rest. 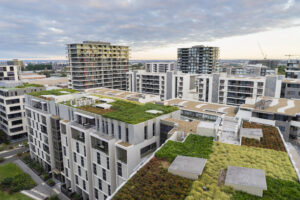 In this list, we explore 11 worldwide green roof projects for their unique and impressive capabilities, functions, and designs.

First, we have a green roof project found in the gorgeous, historical city of Porto, Portugal. The green roof, designed by OODA Architects, goes hand-in-hand with a residential apartment building.

The goal was to not only turn the once singular living space into 17 homes, but also to provide a rich, green park for the building. The chic apartment building also manages to stay true to the history of the city. Its design of unique, triangular grass patterns helps to recall the history of the space extraordinarily well.

OODA Architects also managed to use the green roof space for parking resident’s cars. The environmental benefits of pairing a living roof and living driveway are immense. It helps drainage, limits the need for asphalt, and provides a space for life–both plant and animal–to flourish. 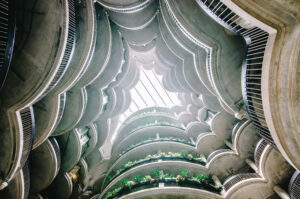 The Nanyang Technological University of Singapore houses the School of Art Design and Media. And its green roof truly lives up to the creativity that inhabits it.

Most green roofs exist on relatively flat surfaces. On the other hand, this campus structure sports long, sloping 45 degree angle living roof surfaces that overlap in a pointed, swirling display.

This building is eye-catching and a great space for students to enjoy. But it also provides ample insulation to the building, decreasing the energy required to cool the space. The green roof also collects all stormwater runoff, which goes to care for the roof itself–and which also limits erosion. 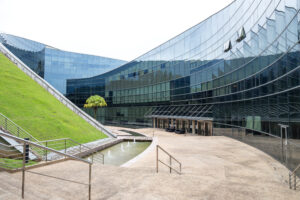 Constructed in 1985, this particular green roof located in Stuttgart, Germany was ahead of its time even then. Today, 35 years later, it still functions as well as it did day one. At the time, this company was already known for being environmentally conscious with their energy usage. While it isn’t one, uninterrupted green roof, it still covers plenty of square footage across the building with many courtyards–enough that nearly every window can see some portion of the green roof.

One of the best functions of this German living roof is it requires no maintenance; it all works to water and care for itself. With a mineral drainage layer, not one droplet of water evaporates before reaching the grasses and plants. This green roof really encapsulates what it is to be a green roof; natural–both in its minimal upkeep and its beauty. 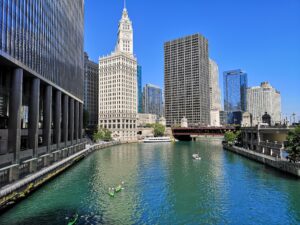 If you look up “most beautiful green roofs in the world”, the Chicago City Hall roof makes nearly EVERY list. In 2000, the city of Chicago realized the startling lack of green spaces in the city and launched the Urban Heat Island Initiative. This initiative would create more green spaces to liven the city and help decrease urban heat. Completed in 2001, the Chicago City Hall living roof has been thriving for almost 20 years, now. Additionally, it saves the tall, formidable structure $5000 a year in electric bills and lowers the effect of the urban heat island effect.

The green roof not only helps the city reach its goals politically, but also houses many species of shrubs, flowers, and trees that are the perfect environment for birds and insects to enjoy. Additionally, the living roof acts as a filter, removing smog-producing particles from the air to create a cooler, cleaner, greener Windy City.

The Ellis Creek Water Recycling Facility began as a–you guessed it–water recycling facility. It did its part to help support the growing population of drought-prone western California. Recently, it took its environmental aspirations a step further by building two living roofs over the building, which surround the open-air basin where the recycled water is held. With a walking path, hardy plants, and some wildlife, the recycling facility transformed itself into something naturally beautiful.

Recycled water is not potable and maintains public areas during seasons of limited rainfall. However, gray water also has other purposes. The Ellis Creek Water Recycling Facility draws in 700 million gallons of recycled water every year. They hope that it will not only be used for upkeep of cities natural landscapes, but also to support many more green roofs in their area. 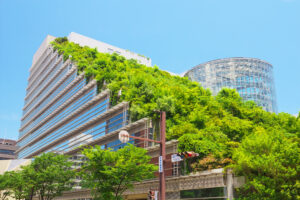 Japan has very few green spaces remaining. And when the ACROS Fukuoka Prefectural International Hall was announced, on one of the last green spaces available, people were upset to be losing the natural, green space. So, the government made it their mission to continue the green with their building. Many designs were submitted, and Emilio Ambaz’s won, with the 15-stepped terrace living roof seen today.

This green roof is unique as it offers space away from the busy, congested city. It’s a haven to commune with nature, meditate, relax, and enjoy the beautiful mountains that surround the city.

Not only that, but the Prefectural International Hall also has stepped waterfalls that drown the noise of the city and lead to reflective pools. Open to the public, this green roof not only helps the building save on energy costs, reduce air pollution, and lower city temperatures, but also provides the green space that the community desperately craved.

Taylor Swift’s hometown houses the Healthplex for Advanced Surgical and Patient Care, which hosts a functional, green space over operating rooms, private spaces, and offices. The green roof covers an extensive surgical area, with 24 operating rooms below it. Many courtyards, pavilions, and paths are available to the hundreds of patients who have extended stay at the hospital.

Hospital halls are lit with skylights and light wells that bring serenity and peace. There is nothing quite as calming as the sound of the fountain trickling above or the twittering of birds in the trees as one is rolled down to surgery. The green roof completely attains its purpose of healing views of nature to lift the spirits of patients in advanced care–and to make something potentially frightening, beautiful. 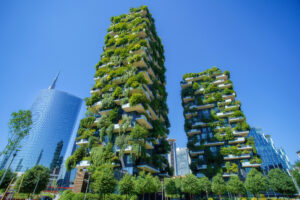 An attempt of reforestation, the Vertical Gardens of Italy, on top of a residential building, are a breathtaking sight. The Vertical Gardens are made up of two apartment buildings, side by side. They host 800 trees, 4500 shrubs, and 15,000 floral plants that seem to just seep from the stoney exterior like the Hanging Gardens of Babylon.

The goal was to rejuvenate the environment while allowing the city to grow and develop as an urban space. It successfully does this by including the equivalent of 215,278 square feet of forest on two, vertical buildings.

The plants of the Bosco Verticale produce humidity, absorb CO2, capture dust particles, and produce clean oxygen–all to benefit the city as a whole.

The green roof is a superb insulator, reducing summer heat gains by 95% and winter heat losses by 26%. Furthermore, the green roof houses 400,000 plants and grasses. And since it is closed off to the public, wildlife from insects to birds to small mammals are able to thrive and enjoy the space. So while not just anyone can walk up there to enjoy the vibrant natural setting, the effects seep into the city with cleaner air and thriving flora and fauna.

The Roof Gardens of the European Patent Office, Rijswijk, Netherlands

Built in the 1990s, this roof garden encapsulates the landscape of the Dutch Netherlands perfectly. In fact, few would even guess it was a garden atop a roof. The European Patent Office has a modern exterior, strict and firm, which contrasts with the roof that calls back to the old roots of the Netherlands. It manages to look more like the Shire than the roof of a patent office.

The roof itself is separated into different sections, each with their own environmental purpose. One section attracts bees and butterflies, while another to house birds. And the reflective pools lessen the urban heat island effect. Every part of the roof, plant, animal, or water, gives homage to the green slopes and clear canals of the Netherlands.

In the city of Utrecht, 316 bus stops have become miniature green roofs that house a variety of sedums, flowers, and grasses. The bus stops attract honey bees and bumblebees–endangered species vital to the environment–allowing them to steadily increase their numbers in the midst of a city.

Urecht’s goal is to have a completely clean public transport system by 2028. The system will include electric busses, bamboo benches, LED lighting, and green roofs above each bus stop! In addition to attracting bees, the roofs also help clean the air and can store rainwater. While these bus stops aren’t one expansive building, they still do their part to help the environment flourish.