The Future of Integrated Solar

The Energy Information Administration reported in 2020 that US power consumption was almost 4 million kW. Assuming that one square mile of solar panels generates 180kW of power, the US would require 22 thousand square miles of solar panels. In other words, to power the US exclusively through solar power, we’d need a solar farm the size of West Virginia.

Since our goal is 100% renewable energy, we need area to install solar panels. Integrating solar into existing infrastructure is the answer. The three main integrated solar products are currently solar roofs, blinds, and windows. But if we want to power the entire US with solar, we’ll need more variety. Integrating solar into walls, cars, sidewalks, or even roads might be the solution to our real estate problem.

Integrating solar into roofs would be the easiest option by far. The resources are readily available and are relatively inexpensive.

Ignoring the financial impossibility–or assuming the federal government could subsidize it–the first option is to put solar panels on each roof across the US. The average roof area is 3,000 square feet. And according to the US Census of 2020, there are 129 million households in the US. Filling each roof completely with solar panels would give us only 14,000 square miles worth of solar panels–which would only be enough to cover 64% of the US annual consumption.

However, the vast majority of US energy consumption comes from businesses, which come equipped with their own roofs. Putting solar panels on the roofs of office buildings and factories would likely be enough to tip the scales to 100%.

Additionally, the efficiency of solar panels is predicted to increase from 20 to 50% by 2050 (The Switch). If we had the luxury of time, we could just cover all of our roofs with solar panels and our energy needs would be fulfilled.

(But by 2050, the world will have suffered 30 more years of irreversible economic damage. The changes need to happen now.)

Integrating solar into walls wouldn’t be too difficult either. We could either cover the walls in adjustable panels that could angle to face the sun, or replace the wall itself with a load-bearing solar panel. Like with solar windows, the downside to walls would be that they don’t directly face the sun, thus decreasing their irradiation and efficiency from roof solar panels. 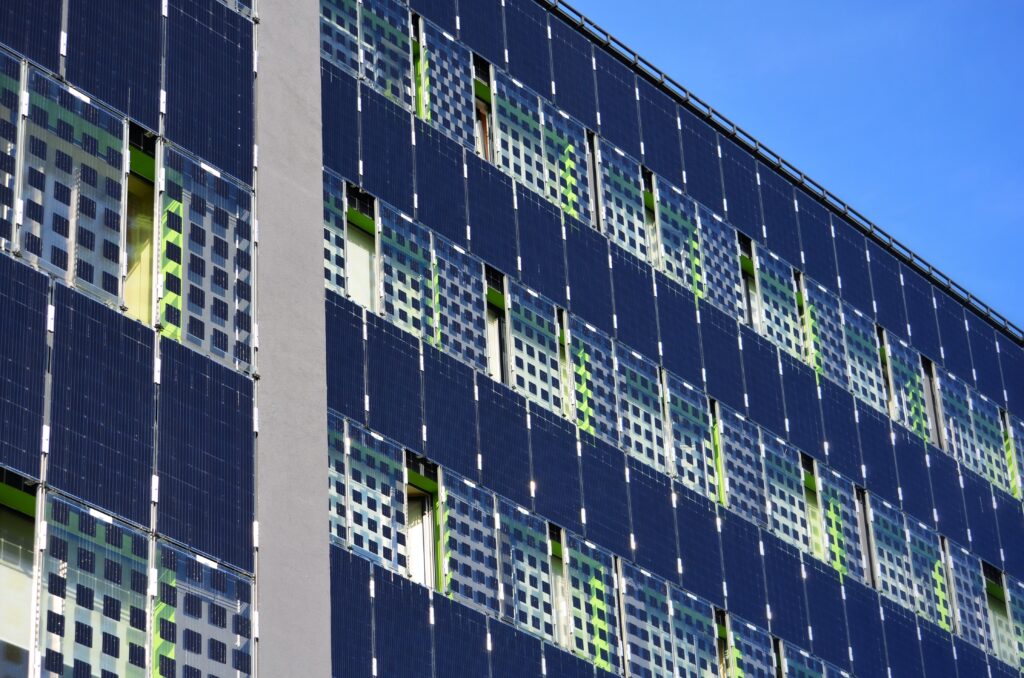 Heliatek–a solar manufacturing company–created solar cells made of oligomers, which are a lightweight type of polymer. These cells are more flexible, much cheaper to manufacture, and have less than 5% the weight of traditional solar cells. Panels made of cells such as these would be ideal to put on walls. Their weight doesn’t require any additional supports, as traditional panels do. And they could lie flat against the wall instead of being suspended by metal supports, giving them a much greater aesthetic appeal on the sides of buildings.

In a few years when Heliatek’s panels have reached the efficiency and durability of traditional silicon panels, they will be a very viable candidate for solar walls. (Because Heliatek’s panels are partially transparent, they might also contribute to the existing market of solar windows. They’re also flexible, meaning they might be compatible with cars.)

Cars don’t have enough roof area to be self-powering–not with how little power solar panels produce, and how much cars currently use. But integrating solar panels onto the roof would still help decrease fuel consumption. 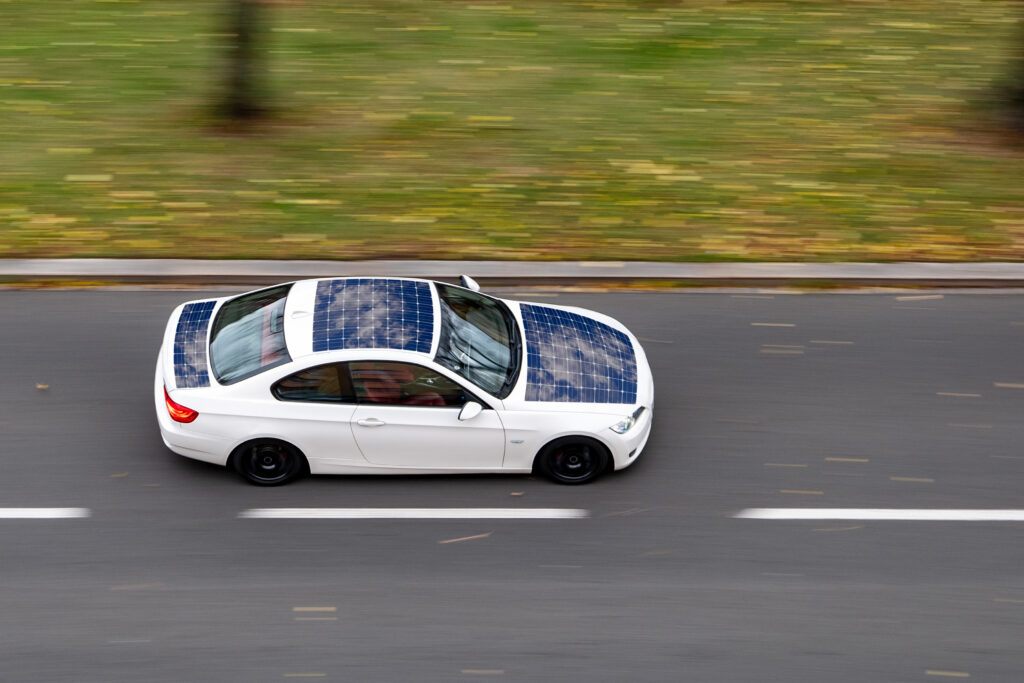 While sidewalks are sometimes in shadow due to surrounding buildings and pedestrians, covering them in resilient solar panels could still make a dent in our energy consumption.

The Netherlands has taken the idea for a solar sidewalk and transformed it into a bicycle lane. The bike path has been hugely successful. Their first attempt was a 230-foot-long lane that produces 93 kWh per square meter per year, which is equivalent to more than 30,000 kWh per year. (This is enough energy to power an average-sized home.) Over 150,000 cyclists pedaled over the stretch of track, inflicting no damage to the panels. Additionally, the panels are designed and installed such that if one panel were to break, the surrounding panels would still be functional. The Dutch plan to expand their solar bicycle lane to true roads, and they even have signed a deal to build such a road in California.

While roads are occasionally covered by cars and shadow and would therefore not have maximum insolation, they still provide lots of federally-owned space that could be integrated with solar farms. The United States Federal Highway Administration reports that there are over 164,000 miles of highways throughout the country. If we assume that each of these highways has only one lane going in each direction, where each lane is 12 feet across, that makes at least 745 square miles (or 20,782,080,000 square feet) of highway.

Filling the roads with solar panels would require 1.2 billion normally-sized panels. They could generate almost 430 billion kW per year (a full 10% of the US 2020 energy consumption). Additionally, Tesla’s solar roof can reportedly withstand a very large amount of impact force–a 2’’ hailstone coming at 100mph–making it a viable candidate to support the weight of cars (although it would certainly break if there were a bad enough crash).

Normandy and the US have already tried solar-covered roads–to little avail. In Normandy, France, the road wasn’t well-manufactured–its pieces didn’t fit together well. This resulted in the road suffering immense damages and producing only 50% of its estimated energy. The US road was an even greater failure, if possible; 75% of its panels broke before their installation, and it currently produces no energy whatsoever.

With well-manufactured and impact-resistant solar panels, more similar to the Dutch bicycle lane described above than the disastrous attempts at a road, a solar panel road might still be a viable option.

Here are some other places we could stick solar if we run out of room on Earth:

Scientists are working on ways to transmit energy through radio waves. This amazing feat would allow us to put solar panels anywhere in space and beam the energy down to Earth. Unfortunately, satellites already require significant power, so we’d have to add lots of panels in order to get any useful amounts of power. 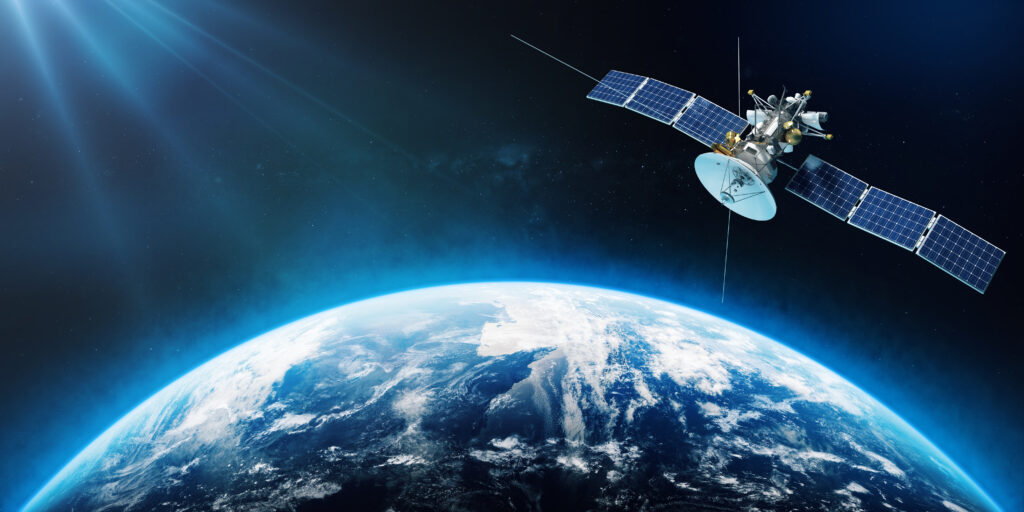 The moon, our natural satellite

Assuming only about ⅓ of the moon can be covered in solar panels–the “light side of the moon”–there are 7,850,000 square miles of usable land on the moon. This enormous area would cover 365% of the US’s energy needs. (However, there’s no guarantee that we’d have exclusive rights to the energy.)

Additionally, because the moon is outside of the Earth’s atmosphere, it receives higher irradiation levels than the Earth. Its energy production would likely be even higher than predicted. This method might also make use of energy transmission through radio waves.

The future is an exciting place for solar energy. These ideas represent several ways we might be able to take steps towards saving our Earth.