Warranty the longest of the following: either 10 years, or until the end of previous roofing warranty

“Kyle Lind sold me on Epic Energy and their services. [He] made the process very simple, gave me the best value, and worked tirelessly day and night to make sure he was providing the best possible service which he and his team always delivered. Epic Energy is very responsive, their staff knowledgeable, they are always respectful, and pleasant to deal with. I had them install a new energy efficient flat roof during the winter during the rainy season and although I had some issues initially with the roof they went above and beyond to make sure I was satisfied. This company is trustworthy and I would highly recommend them.” 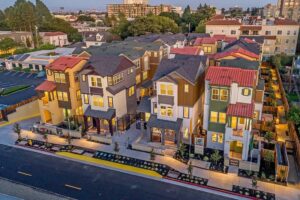 Viet wanted his roof replaced because his tenants informed him that it was leaking due to winter storms. Within three weeks of his initial call (Nov 30), he had signed the contract (Dec 3), the installation had been completed (Dec 18), and final inspections had been performed (Dec 20). Viet was waiting to sign the completion certificate until he saw how the roof did under an intense storm. [–and good thing, because–]

Just three weeks after the water-tight inspection, California saw a huge winter storm. Viet’s roof began to leak. Because of the continued storms, it was impossible to repair the roof for a few weeks, during which more problem areas began to leak as well, despite the tarps on the roof.

After two weeks, the storms finally stopped for long enough that we could redo the roof. It took one round of same-day repairs to complete. Epic also brought in a carpet cleaning service to clean and repair carpet damaged by the leaks.

Unfortunately, just a couple of weeks later, the roof began to leak again. We were able to get in quickly to do repairs, which were completed in one day. Again, a couple of weeks later, the roof saw more leaks. Repairs were completed, the final inspection was performed, and the final completion certificate was signed, and there are no reports of any problems since. We are grateful for Viet for his patience working with us and for his positive review.