Efficiency of 2021 HVAC Systems: Is it Worth Upgrading?

Efficiency of 2021 HVAC Systems: Is it Worth Upgrading?

“HVAC” refers to the combination of systems that heat and cool your home, including air conditioners, heat pumps, and furnaces. The age of the HVAC system determines its energy efficiency. If your HVAC unit is a few years old, installing a new one now might save you money in the long run. 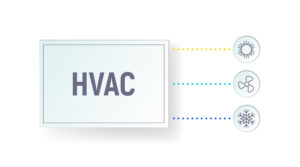 According to the US Department of Energy (DOE), “building energy codes are projected to save $126 billion cumulatively by 2040.” Additionally, “cumulative utility bill savings [due to appliance and equipment standards] to consumers are estimated to be more than … $2 trillion by 2030.”

This two trillion dollars is split between all energy consumers who upgrade their systems to comply with new standards.. These standards include, amongst other things, upgrading HVAC systems to be more energy-efficient. Who wouldn’t want to jump on that two-trillion-dollar bandwagon?

The DOE also reports that, “building energy codes have a 40-year history of reducing consumer energy bills. Today’s energy codes provide more than 30% savings compared to those of less than a decade ago.”

The typical utility bill for a US homeowner is 50% heating and cooling. A 30% savings on half your energy bill is significant.

The math: keeping it general

While it is impossible to compare the efficiency of each individual furnace here, HVAC systems are rated using their “SEER” rating, or “Seasonal Energy Efficiency Ratio.” While the SEER rating of a unit tends to decrease over time, comparing SEER ratings across HVAC units can still be a useful metric for deciding whether replacing your system is worth it.

An increase in SEER from 14 to 17 saves an average of $66 a year, but qualifies you for a $300 federal tax credit. The highest SEER rating in a commercial central air conditioner is 26 (the Lennox XC25). Upgrading from a system with a SEER 14 to the Lennox XC25 would save you $167 a year in addition to the tax credit. The numbers start to look juicy. (Keep in mind that if your HVAC system you purchased 10 years ago had an initial SEER rating of 14, the rating has likely decreased since then.)

The math: up-close and personal

You may still be asking yourself: but is an upgrade worth it for me?

Here is a formula to calculate how much installing an improved HVAC unit will save you annually (based on Coolray’s formula).

1. Calculate how much energy each air conditioner will use annually using this equation:

For example, if you realize your old, less efficient system is too large for your home, you might replace a 3-ton, 14-SEER system with a 2-ton, 17 SEER system, the equations would be:

2. Find the difference between these two annual energies.

3. Convert this to kilowatt-hours by dividing by 1000

4. Multiply this number by your area’s electricity rate. For Sacramento, this is 15.34¢ per kWh.

The most energy efficient central air conditioners and air source heat pumps as of 2020 can be found on the Energy Star website. Comparing these products with the cost/energy use of your current model can help you see exactly how much money upgrading could save you.

Putting aside the numbers, here are some specific situations where replacing your HVAC unit is probably the way to go:

If in doubt, you could always ask a home energy auditor to assess your home.

Hopefully these few tips help you decide whether it is worth replacing your old HVAC unit with a new one.