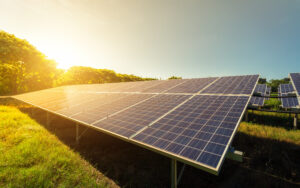 If developing countries were never to use fossil fuels for electricity, it wouldn’t be the first time they’d skipped a developmental step. Fixed telephones never became popular in developing countries; the fact that they had to be connected to landlines meant that having a phone wasn’t feasible. When mobile phones started to become widely manufactured, they spread across Africa like wildfire. Credit cards never became popular either; instead, people skipped straight to using online money.

Developing countries have skipped steps before; who’s to say they won’t do it again by going straight to solar power without ever getting grid electricity? In fact, since 2015, developing countries – primarily China — have been outspending developed countries in renewable energy.

Grid electricity comes with a monthly fee, plus the cost of connecting to the grid, while solar costs nothing after installation. Off-grid systems, especially solar, are less expensive and quicker to install. Off-grid also has the benefit of not requiring thousands of miles of high-voltage wiring.

To understand the future of solar in developing countries, it’s helpful to look at a few specific cases.

Kenya’s electricity goal, known as the Kenya Electricity Modernisation Project (KEMP), is that 100% of its citizens will have access to the grid by 2022 and all of its power be renewable by 2030. In 2013, close to 70% of the population — 34.8 million of 49.7 million — didn’t have access to the power grid. By 2019, 70% of people now have access. The last 30% is the hardest connect because it represents the poorest and those in the most rural places.

While 34.8 million citizens of Kenya might have access to electricity, Kenya Power, the only electricity company in Kenya, had only 6.5 million customers in 2018. Access to the grid doesn’t equal connection to the grid. To facilitate the upgrade from “access” to “connection,” the Kenyan government has decreased the price of connection from $500 (in 2007) to $150 (2019). It also might take nine months to get connected to the grid.

Kenya has made several steps toward increasing the prevalence of solar power. First, it has removed import duties and value-added taxes from renewable energy equipment. It has also championed several projects that utilize the private sector; approximately 200,000 households have had solar installed by a private company. It has also launched several solar projects since 2014 to increase the spread of solar.

Nigeria’s goal is to have universal access to electricity by 2030. Again, note the difference between “access” and “connection.” According to USAID, 170 million of the 190 million inhabitants of Nigeria are connected to the power grid, which is unreliable. At this point, they have more people connected to the grid than they have electricity generation capacity, so blackouts are frequent. Right now, their goal is to improve their generation capacity.

Nigeria aims to have 16% renewable energy consumption by 2030, and the government has decided to push for solar power. The Nigerian Vice President, Yemi Osinbajo, said in October 2015, that his people would soon see “a solar power revolution.” He says, “we know that coal is available in some states like Kogi and Enugu, but the main issue is that solar power, which entails the conversion of sunlight into electricity, is available everywhere. You don’t need to transport it; you don’t need to put it in a grid. It is much cheaper to buy… If we want to deliver electricity quickly to that number of Nigerians at a relatively cheaper cost, we must take the solar route.”

The Nigerian government is convinced — and for a good reason — that solar is the best option to provide power to the country’s households. Solar would be more than feasible geographically; as reported by Financial Nigeria International, “analysts have projected that Nigeria could generate 600,000MW by deploying Solar PV panels from just 1% of Nigeria’s landmass.”

On the other hand, Nigeria combined its Ministers of Power, Housing, and Works into one Minister, which, along with a general lethargy to act in the realm of solar power, might represent a lack of understanding of the importance of energy to its country’s inhabitants.

Additionally, Nigeria’s income per capita decreased from $5450 in 2016 to $5315 in 2019. While this isn’t a huge difference, it might emphasize Nigeria’s challenge to build a robust electric infrastructure.

As of 2012, they had already achieved universal electricity access. Solar and wind have been cheaper than coal-generated electricity since 2015, making them the preferable option for consumers.

While there have been unavoidable storms that have knocked out their power for more than 4 hours a year the past few years, Chile’s grid is getting progressively more reliable. When a total eclipse occurred for Chile in July of 2019, its solar power was knocked out, but the power grid was able to make up the difference. If houses are connected both to the grid and solar, when one fails, the other can pick up the slack.

When it comes to renewables, by 2035, Chile plans to have 60% of electricity generated by renewable sources. By 2050, they aim to increase that to 70% renewable energy.

To that end, all that remains for Chile to do is install more solar farms. To do so, Chile has implemented a program with the support of several other nations that will help it make the transition from fossil fuels to solar power. This program involves building South America’s first Concentrating Solar Power plant, with an expected capacity of 50 MW. When speaking of Chile, Chris Goodall, who wrote The Switch, said, “in a country with substantial unmet energy needs and high electricity prices, solar will be the engine of growth in power production.”

Chile’s commitment to achieving its goals is pretty straightforward. It started with the advantage of already having universal electricity access and not having any substantial fossil fuel resources within its own borders. As of 2019, they had already achieved their solar production goals for 2025.

In January of 2019, India declared universal electrification. It has since been shown that this wasn’t entirely true; only households that applied for power received it, leaving about 15 million people without access to electricity in India. Because of the benefits of solar, the easiest way to get these 15 million people access to power would be either through increasing India’s solar generation capacity or by providing people with easy ways to purchase individual solar panels for their homes.

India’s Prime Minister, Narendra Modi set a target for India of 100 GW of solar capacity by 2030. By 2019, they had reached almost 30 GW, and their capacity continues to almost double from year to year. In 2022, based on this model, its production capacity should reach about 240 GW. While this isn’t quite up to their goal, it is still impressive.

The Indian Ministry of New and Renewable Energy has created several programs to help India achieve its target, primarily through providing subsidies to private solar power enterprises. India also plans to install PV panels on tops of canals and connect them to the grid, which would be an unprecedented type of integrated solar. India is also geographically perfect for solar; it has clear skies 300 days of the year and receives impressive amounts of solar radiation.

Goodall predicts that: “solar will grow rapidly with strong backing from the Modi government and from the favorable underlying economics. As in other countries around the world, it will then start to become increasingly costly to run the grid to cope with the unpredictability and diurnal variability of solar power.” He goes on to explain that despite the additional costs of batteries included in the price of PV, solar will soon outpace the cost of the grid. KPMG expects 20% of Indian houses to have PV by 2024.

An analysis by IRENA found that the costs for setting up solar PV projects have dropped by about 80% in India between 2010 and 2018. Today, solar energy sells for less than fossil fuel energy.

Reading Time: 4 minutes Residential Applications for Origami-Based Solar Panels Since 2012, NASA has been looking into using origami-based solar arrays on their satellites.