Since 2012, NASA has been looking into using origami-based solar arrays on their satellites. Satellites need to be solar-powered, but the solar panels need to start folded along the body of the satellite during the launch through the Earth’s atmosphere, only to have the solar panels deploy to their full size once the satellite reached space. In collaboration with JPL and BYU, they were able to design a solar array that, when folded, spans less than 9 feet, but when unfolded, is 82 feet across, based on a Japanese origami pattern called Miura. 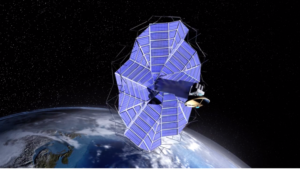 Such an array makes sense in a satellite, but might it have other applications in more Earth-based technology? Is there any reason to use origami-based solar panels on a home, for example? As it turns out, there are several benefits a Miura-patterned solar panel would have to a roof.

First, the panel would likely be mounted from the center. This would permit the panel to rotate to face the sun no matter its position in the sky. The panel’s centered mount would also make it easy to raise above any shade that might fall upon your roof. For example, if there are any taller trees around your home, raise the solar panel to above the level of the trees to maximize its irradiation and power production. This ability to have solar panels at different heights also would allow the roof to have a larger area covered with solar panels than the area of the roof.

Second, the Miura-based panel would start minuscule and expand to be enormous. The satellite’s solar panels begin at less than 1/9th their final deployment size. If the Miura-based panel had the same total area as a typical solar panel, this would mean starting with a circle six inches across and ending with one 4.25 feet across. The panel unfolds by pulling on the edge of the array, and folds by pushing in on the edge. This easy foldability would give the solar panels greater transportability. More solar panels could fit in a truck before installment–imagine six-inch-across circles as opposed to 3.25 by 5-foot boxes–or, in case of the need for a roof replacement, they could be easily removed from the roof and stored for a period of time.

The applications of easily transportable solar panels are endless. If you have a cabin you want to be solar-powered but you don’t want the panels to be damaged while you’re away, you could simply fold them up and stick them under your bunk bed. If you’re hiking or in a zombie-apocalypse-type situation and need to power an emergency radio or a chainsaw, you could unfold your transportable solar panels. If it’s going to hail on your roof, you could remove your panels to avoid damage. If your roof gets dirty, you could raise your solar panels with their center mount or remove them to wash it.

Third, in a semi-deployed state, Miura-based panels have ridged panels at different angles, as shown in the picture above. This folded state could potentially lead to a greater panel surface area than the surface area of the roof. While this might not be immensely useful–some panels will unavoidably face away from the sun, while others will be facing towards it–it would inevitably increase energy production.

Along with these potential benefits come potential downsides. Because these panels have never been used residentially, there would be a ten+ year period of development and commercialization. Additionally, they would likely be slightly more expensive to produce than the typical solar panel because multiple different sizes of solar cells would need to be printed per panel and because of the requisite flexible membrane between panels.

One version of residential origami solar panels–called “Solgami”–was a Lexus Design Award finalist and presented at Milan Design Week this year by Ben Berwick. He created and commercialized a version of a solar window–more aptly described as a “solar blind”–designed specifically to go behind a window in apartments. Because the panel is origami-based, the panel allows ⅔ of the sunlight that hits it to bounce through into the apartment, generating power along its way. Although information about this panel is scarce, it likely shares similar easy transportation perks with the Miura-based panels.

The field of solar energy production is progressing quickly; maybe origami-based solar panels will be the next big thing that your home needs. When the apocalypse arrives and zombies take over all of our residences and power grids, they will certainly be useful. More realistically, in the face of natural disasters or war, origami solar panels could be what saves us.