By 2050, How Much Energy and Money Could the World Save With Solar?

By 2050, How Much Energy and Money Could the World Save With Solar?

And is it worth it for you to get solar now, or should you wait until 2050? 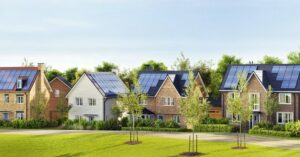 Solar is the fastest-growing energy source in the world. The efficiency of solar power is increasing, and its cost per watt is decreasing so quickly that it — along with other renewable energy sources — will make up 50% of the United States’ energy use in 2050. In addition to reducing our reliance on fossil fuels, solar could be 71% less expensive in 2050 than it is now. This reduction in price means that if we transition to renewable energy, the global economy could save $160 trillion by 2050.

Within the next few decades, solar energy is poised to become one of the largest energy sources in the world. Experts believe that 18,895 GW of solar will be installed by 2050. Along with wind, this could reduce the percentage of GDP spent on energy from 5.5% to 3.1%

These numbers apply to the world as a whole, but what do they mean for us as individuals? If we assume that each of the 7 billion people on the earth gets an equal share of the global economy profits, each person will save $23,000 by 2050 if they invested in solar, according to the International Renewable Energy Agency (IRENA).

So what does this mean for someone considering solar? For instance, how much would it cost you to buy solar in 2050, and how much money would it save you if you invested now?

Looking at the numbers.

The average cost of installing a full solar array for your home is $17,000, and the average savings after 20 years is $20,000, meaning that it’s earned you a total of $3,000 on top of value added to your home. In 2050, according to Bloomberg New Energy Finance (BNEF) analysis, it will be 71% less expensive per watt of solar power in 2050, making it even cheaper to install a solar array. Assuming the rate of payback at $1,850 a year, after 20 years, you’ll have saved $37,000 in energy costs. While it takes an average of ten years to pay off solar today, in 2050, it will likely take around half of that.

Should I invest now or wait?

It will definitely be more profitable in 2050 to invest in solar panels, but that doesn’t mean it isn’t worth investing right now. If you install solar panels today and replace them in 2050, you will have saved even more money than if you wait until the cost goes down. Additionally, you will have done an enormous favor to the environment. Using solar instead of fossil fuels helps reduce the CO2 put into the atmosphere. Each year, an average-sized solar panel system eliminates the same amount of carbon dioxide as one hundred trees, so by 2070, you could have saved as much CO2 as the equivalent of 5,000 trees — that’s like 1.1 million square feet of forest.

The numbers could be even better than that. Chris Goodall argues in his book The Switch, that the vast majority of predictions for solar efficiency and the cost of solar power have been wild underestimates.

For example, in 2010, the International Energy Agency estimated that the world would have 200 gigawatts of solar power by 2020. By early 2015, we had already achieved this estimation. They predicted a yearly increase in total solar power of 34 gigawatts in 2020, but by 2013, we had already reached this rate of growth. So while it’s already worth it to get solar panels right now, the fact that solar might actually be more efficient and less costly by 2050 means that it will continue to improve as an investment.

Get ahead of the mandate.

As of September of 2018, California mandated that by 2045, 100% of its energy needed to be renewable. Rather than waiting until the last minute to help your home become self-sufficient in terms of energy, you might consider getting solar panels now so that by 2045, you could have a leg up and $15,000 on those who choose to invest in 2044. If you’re looking for a long-term investment that will help you save and even earn money, solar is something that’s going to keep growing in cost and energy benefits throughout this century.

The bottom line is that while solar will become a better and better investment as time goes on, it’s a smart one to make today. Whether you invest now or in the future, you’ll be saving cash and the environment.